For many years, and even from Cofek own past records and experiences, all has never been well at the National Oil Corporation of Kenya (Nock), largely because of governance related issues.

But the picture is not as gloomy as it appears especially if the government would inject the requested  Sh13.5 bn to jumpstart the ‘sleeping giant’ that is Nock.

The request comes at a time the finance and budget committees of parliament will have a difficult task on what to prioritize and or not prioritize across all government appropriation as the supplementary budget beckons.

On March 1, 2020 Leparan Morintat was picked as the new Nock CEO after a not-so-good chain of leadership that eventually choked the financial taps and left the institution cash-strapped.

A long serving CEO and chairman literally left Nock on its’ deathbed as Morintat inherited it. A litany of challenges persisted at the institution

Before his appointment, Morintat who had come a close second for the MD position at the Kenya Pipeline Company, was involved in various multi-national firms in the energy sector with his last posting at a regional renewable energy firm based in Addis Ababa, Ethiopia.

Although he wasn’t an oil and gas insider, Mr Morintat’s experience running similar ventures gave him an edge over his peers.

Other than a performing CEO, today Nock is in safe hands of a sober chairman who believes in integrity and is on public record canvassing for good governance – at all levels. Indeed Mr Patrick Obath is also a seasoned oil industry with massive local and international experience.

The expansive board comprising 16 members has majority of the members as oil and gas experts. This is a huge plus for Nock which has in part been bogged down mostly by the history and inability to access credit. 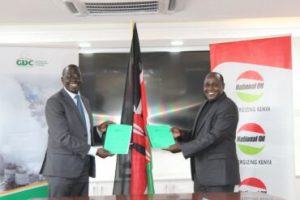 But what has the leadership of Morintat achieved even under the very difficult circumstances?

He has, under the guidance and approval of Nock board, enhanced key internal controls – from operational, financial to the ICT.

Monitoring through regular audits has made it possible for Nock to pay its’ staff salaries on time.

Coming from a rotten past, indiscipline that would at times border on sabotage of the Nock interest, the new CEO has instilled considerable sense of discipline. As would be expected, several staff have undergone due process and some either sacked or suspended.

A few senior managers have been recruited in order that Nock can upscale its’ management competencies especially in key areas of upstream, downstream, ICT, finance among others.

Incidentally, and even after it became impossible for Nock to participate in the key process of Open Tender System (OTS) of procuring fuel, Morintat team came up with a PPP like arrangement in which they have entered a sound product purchase and OTS financing partnership with local firms.

Under the arrangement, Nock is able to purchase fuel through external financing and a revenue sharing formula agreed upon with the parties.

According to our assessment, Nock has attained some considerable operational efficiency which has been missing for the past 20 years. Portfolio rationalization, real-time inventory and proactive dealer management.

Robust dealer agreements, asset renewals as well as brand refreshments has been, though dismal, realized in the last two years.

On finances, what has been key is that Nock has now obtained a one year moratorium from Kenya Commercial Bank (KCB) on both the principal and interest up until June 2022.

Nock projects that in the financial year 2021/2022, it will raise a revenue of Sh11.4 billion with a high operating expenses namely – staff expenses (Sh457 mn); Facilities expenses (Sh126 mn); Administrative expenses (Sh169 mn); Depreciation and amortization (ShSh295 mn) and a whopping Sh1.1 bn as finance costs owing to the loans.

Both KCB and Stanbic who conducted an independent business and liquidity review of Nock in 2020 had initially pushed to appoint an independent management consultant but have since softened their stance and now want to nominate or co-opt their representative on turnaround committee of the Nock board.

The elephant in the boardroom at Nock is how they will persuade the parent ministry and especially the national treasury to undertake massive write-off of bad debts and legacy stock hive offs in anticipation of clean up of the bad looking balance sheet.

Last week Nock team and the Principal Secretary in charge of petroleum Andrew Kamau met with the Energy Committee of the National Assembly with several requests;

First, to request the two banks to re-open credit lines since even with its huge loan book, Nock has not exceeded its National Treasury’s approved borrowing limit.

Third, Nock wants National Assembly to assist to extend moratorium on the Sh6.6 bn pending disbursement of the budget request and further want strengthening of subsidiary legislations to support delivery of Nock mandate.

Further, under the chairmanship of Patrick Obath, the leadership of nock was recently holed up in a retreat in Nyeri to develop a road map to profitability. This culminated in the development of turn around plan that will see the corporation venture into the renewables markets even as it positions itself in the energy transition trajectory.

A raft of more changes that will be effected soon including an organizational restructuring and rebranding program will see the National Oil Corporation rebound back to profitability, grow its downstream market share and commence remitting commensurate dividends to the shareholder.

A Presidential task force on parastatal reforms had in 2013 recommended that the National Oil Corporation of Kenya be strengthened and supported to grow into a formidable global oil firm alongside the lines of Petronas of Malaysia. This will see Nock play a significant role in Kenya’s economy through the entire oil and gas value chain as well as play a significant role in the blue economy.

Got feedback to this story?