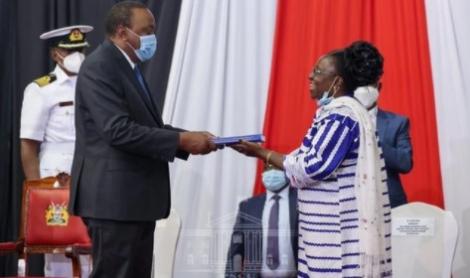 Majority Leader Amos Kimunya invoked provisions of National Assembly order 96 to move an early adjournment on debate for approval of Principal Secretary for Implementation of Curriculum Reforms Prof Fatuma Chege after sensing that her appointment risked being shot down.

What initially appeared to be a smooth sail for the Kenyatta University Deputy Vice Chancellor turned uncertain shortly after Minority Leader John Mbadi faulted the President for creation of too many and conflicting PS positions within the Ministry of Education.

Mr Mbadi, an accountant and a member of the Budget Committee, faulted Government for wasting resources by creating unnecessary positions.

He was supported by Minority Whip Junet Mohammed who said that instead of appointing Prof Chege, an existing ‘idle PS Cheruyoit’ should have been given the responsibilities.

In an interesting development, the National Assembly passed the Teachers Service Commission nominees including Chairman Dr Jamleck Muturi without debate.