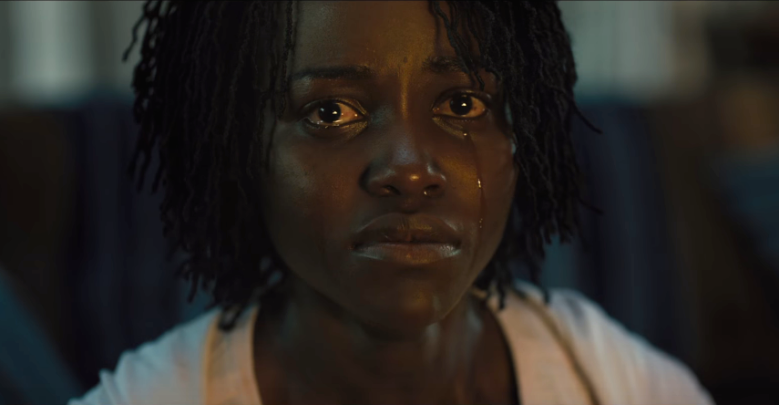 Kenyan Lupita Nyong’o (pictured) and Winston Duke star in the “Get Out” filmmaker’s followup, which features an entire family of scissor-wielding doppelgängers.

After earning both critical (a 99% rating on Rotten Tomatoes, an Oscar win for Peele’s original screenplay) and commercial (over $250 million in worldwide receipts) praise for his feature debut “Get Out,” filmmaker Jordan Peele is preparing to return to the big screen with his much-anticipated followup, “Us.” This time around, Peele swears he’s going for a more hard horror vibe, twisting the haunted house narrative into some weird new shapes.

At a recent press event, Peele promised that the feature is a horror film, and that he was compelled to making a “new horror mythology and a new monster.” He added, “I think that monsters and stories about monsters are our best ways of getting at deeper truths and facing our fears as a society.” These monsters, however, might look a little familiar. That’s the point, as the film’s first trailer doesn’t hide that fact that the monsters are actually doppelgängers of the family at the story’s center.

Still, the film’s recently released official plotline hints at plenty of secrets to come: “A mother (Academy Award winner Lupita Nyong’o from ‘Black Panther,’ ‘Star Wars: The Last Jedi,’ and ’12 Years a Slave’) and a father (Winston Duke from ‘Black Panther’) take their kids to their beach house expecting to unplug and unwind with friends (including Emmy winner Elisabeth Moss from TV series ‘The Handmaid’s Tale’). But as night descends, their serenity turns to tension and chaos when some shocking visitors arrive uninvited.”
The “Get Out” filmmaker also noted that, while it was important for him to make a film with “a black family at the center,” this film “unlike ‘Get Out,’ is not about race.” This first trailer leaves plenty of room open for interpretation, however, zinging from a relatively straightforward star to a chilling middle and a conclusion that’s rife with obvious (if unexplained) symbolism. Opening with the family heading to a beach vacation, terror soon strikes when the family’s young son goes temporarily missing. Later that night, a new family arrives, and while they look exactly like Nyong’o, Duke, and their characters’ offspring, they’ve got very different intentions than the all-American family at the center of the film.

And that’s pretty much when everything goes totally bonkers, culminating in some major scares and the promise that Peele is about to transform scissors into the year’s most terrifying prop.

At last year’s Toronto International Film Festival, co-star Moss was understandably cagey about the film, but was clearly thrilled about what’s to come. “All I can kind of say is, I’m obviously a huge fan of ‘Get Out,’ as is the rest of the world, and I think this movie’s gonna be really good,” she told IndieWire in an interview. “I just think it’s gonna be good. It’s just gonna be really good, and that’s it. … It’s true to what Jordan wants to make, which are these thought-provoking popcorn movies.”