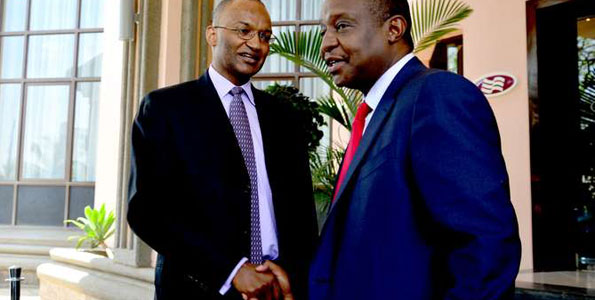 NAIROBI (Reuters) – Kenya’s economy has displayed “extraordinary resilience” in the face of political uncertainty, its central bank governor said on Friday, attributing the strength to its diversity and small and medium enterprises.

He projected expansion would be 5.1 percent this year — the lowest of President Uhuru Kenyatta’s tenure but still well above the 2.6 percent the International Monetary Fund predicts for sub-Sahara Africa as a whole.

Kenya was buffeted by a severe drought in the first half of the year, and a prolonged and disruptive election period in the second after the Supreme Court nullified an Aug. 8 presidential vote.

Kenyatta is now set to be sworn in on Tuesday after the court upheld his victory in the repeat election last month, which was boycotted by his main rival Raila Odinga.

Patrick Njoroge, the governor of the central bank, lowered his forecast for growth from an initial one of 5.7 percent. But he expects a faster pace of expansion 2018.

The central bank’s forecast is in line with that of the government, which also trimmed its initial forecast of 5.9 percent for this year.

The political uncertainty surrounding the elections has caused some acute pain in parts of the economy but Njoroge said micro-, small- and medium-sized enterprises in wholesale and retail, transport and storage and real estate sectors had been “quite dynamic”, blunting the impact.

“These are the ones that have been the backbone of the resilience we have seen so far in 2017,” he told a news conference, adding the three sectors account for 18 percent of annual economic output.

The bulk of the Kenyan economy is in the informal sector. The governor said most small business in that sector rely on borrowing from friends or family, explaining their resilience.

He said the diverse nature of the economy, without reliance on a single commodity or a trading partner, had also helped to cushion its performance.

Foreigners account for a quarter of the holdings in the stock market and only 4 percent of the government’s securities market, he said.

Njoroge nonetheless raised the current account deficit forecast for this year to 6.2 percent of GDP from the bank’s initial expectation of 5.5 percent. Njoroge blamed higher imports of food commodities like maize and a jump in global oil prices for the new forecast.

He said a study on the impact of a cap on commercial lending rates, which has curbed private sector credit growth and hurt bank profits, would be finalised soon to allow for a proper debate on the way forward.

Banks have been calling for the removal of the cap while lawmakers insist it was there to stay.