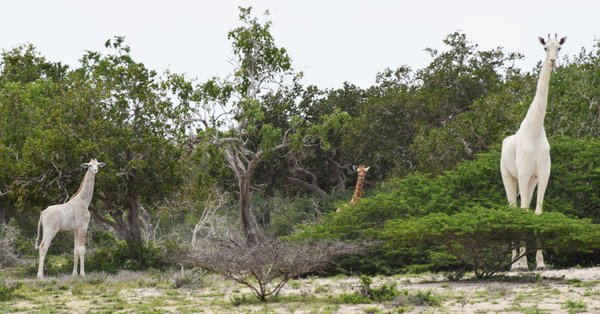 NEW YORK TIMES >>> A villager in Kenya was herding animals one day recently when he came upon a head-turning sight. A ghostly creature with a mighty long neck was grazing off in the distance.

Upon closer inspection, the vision was revealed to be a female reticulated giraffe — tall, majestic and preternaturally white — and she was accompanied by a smaller apparition: a pale baby giraffe.

The sightings in June, in Garissa County near the Ishaqbini Hirola Conservancy, sent the villager scurrying off to tell rangers, the founder of the Hirola Conservation Program said on Thursday. The news has been ricocheting across continents and making headlines ever since.

Conservationists who hurried to the site managed to capture what is believed to be the first known video footage of white giraffes, said Abdullahi H. Ali, who founded Hirola and has been working to conserve the critically endangered hirola antelope in the eastern part of the country.

“We spent almost 20 minutes with the beautiful animals and had the pleasure of getting close-up photos and video of the duo,” he said by email. “To our surprise, one normal color reticulated giraffe also was among the mother and calf. You can actually compare the difference.”

Hirola said on its website: “They were so close and extremely calm and seemed not disturbed by our presence. The mother kept pacing back and forth a few yards in front of us while signaling the baby giraffe to hide behind the bushes.”

The white giraffes displayed the characteristics of a genetic condition known as leucism, which inhibits pigmentation in skin cells, Dr. Ali said. The condition occurs across the animal kingdom. Birds, lions, fish, peacocks, penguins, eagles, hippos, moose and snakes have all displayed the trait.

The baby giraffe, Hirola said, was not totally white, but its tinges of color seemed to be “fading away, leaving the baby white as it approaches adulthood.”

It was unclear if, under the hot African sun, the giraffes’ skin was vulnerable to damage, Dr. Ali said. The rangers did not get close enough to examine the mother and baby, but he added: “I think they will be O.K. They seemed to be in excellent shape.”

The communities in the area were “excited” about the rare sightings of leucistic giraffes, Dr. Ali said, and they were banding together to protect them.

Giraffes, which can grow to 20 feet and are the world’s tallest land mammals, have been declared “vulnerable” to extinction because of poaching and a loss of habitat, according to the Red List of Threatened Species published in 2016 by the International Union for the Conservation of Nature.

The giraffe population had declined by 40 percent over the past three decades and stood at about 97,600 at the time the findings were released. According to the Giraffe Conservation Foundation, the animals are extinct in at least seven countries in Africa and can live up to 25 years in the wild. But more than half of all giraffe calves die before they’re six months old because they’re often the targets of predators like lions, hyenas, wild dogs and crocodiles.

Dr. Ali said his team would like to follow and monitor the white giraffes seen in Kenya to document their life spans.

He said it was the third such sighting in recent years: “The only two known sightings have been made in Kenya and Tanzania.”

A previous sighting was reported in April 2016 in Garissa County. Dr. Ali said a white giraffe was also seen in January 2016 in Tarangire National Park in Tanzania. According to National Geographic, scientists at the Wild Nature Institute, based in New Hampshire, first reported the newborn Masai giraffe calf in 2015, and a guide named her Omo, after a brand of popular detergent.

In many parts of the world, white animals are hunted, revered or protected. There are fewer white lions in the wild compared with the hundreds in captivity, according to the Global White Lion Protection Trust in South Africa.

In Cajun lore, seeing a white alligator in the swamp, like the ones with translucent skin and deep blue eyes that have been housed at the Audubon Aquarium of the Americas in New Orleans, is considered good luck.

Besides having pale skin because of leucism or albinism, animals can have a third condition, called isabellinism, that leaves them looking grayish-yellow; but they can still produce pigment. Scientists have quibbled over the exact differences in the conditions, but leucism and isabellinism are sometimes used interchangeably.

Legend has it — and surely it was just that — that the color isabella (and hence “isabellinism”) is named after the Archduchess Isabella of Austria, who supposedly made a strange vow at the start of the 17th century not to change her underwear until her husband, the Archduke Albert, had conquered the city of Ostend and united the country’s provinces. That campaign took three long years.