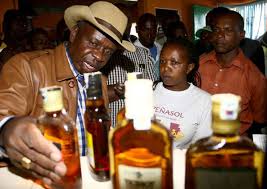 Ladies and gentlemen, it has come to our attention that there is a sudden increase in fake and unlicensed alcoholic products in circulation in Kenya despite the government directive to crackdown illicit brews and drugs.

In the quest to make quick money, manufacturers of illicit brews are spiking their backyard concoctions with deadly industrial chemicals such as methanol, food grade ethanol, sisal juice or jet fuel, to make them more potent and more desirable to consumers. An estimated 4 million Kenyans countrywide are currently consuming illicit brews.

An estimated 14,000 young people die each year from complications related to consuming illegally-brewed alcohol while many more victims are currently suffering permanent defects resulting from second generation alcoholic drinks. It is instructive to note that with a comprehensive research, the numbers of victims could rise.

Surging numbers of illegal alcohol manufacturers are exposing millions of Kenyan consumers to health risks such as substance poisoning. It is the poorest of the poor in society who provide an immediate market for the uninspected alcoholic beverages which often contain lethal compounds.

We have received reports from various distributors and distillers across the country, who have raised valid concerns about some of their popular brands being illegally repackaged and sold to unsuspecting consumers by unscrupulous traders.

Among the products being sold are brands like Metropolitan Gin; Kingston Vodka; Simba Waragi; Shakers Vodka; Dolphin Vodka; Empire Cane Spirit, among others.

Over 50 per cent of all alcoholic outlets in Kenya sell fake or adulterated products to unsuspecting clients. More than 900 unlicensed factories in the country that manufacture these brews.

The spike in production and consumption of illicit alcohol has been fueled by individuals who seem to be colluding with corrupt law-enforcing officers to facilitate the peddling of substances that do not meet the standards required by law.

From our in-house research and reports, the following areas have been identified as breeding grounds for manufacturing of illicit alcohol:

Genuine alcoholic manufacturers do not just suffer the loss associated with production of second generation alcoholic products. They lose revenues as dubious dealers still hold onto 30 per cent market share of the alcoholic multi-billion industry. The loss and destruction of illegitimate alcohol business has seen genuine investors losing an estimated tens of millions daily.

The unlawful trade is robbing the country over Sh30 billion in annual revenue. This is because illicit dealers do not pay tax at all yet they shrink revenues of those who genuinely pay taxes. Simply put, the increasing numbers of illicit and illegal alcoholic beverages is a threat to human health, security and the economy.

The law imposes strict penalties against persons found manufacturing or distributing illicit alcohol against the set rules, including a Sh2 million fine or a jail term of up to 5 years. The law also set penalties against those found selling alcohol to under-age consumers and to police officers in uniform.

Regrettably and as long as a steady market exists for their products, and sections of authorities are all too willing to turn a blind eye, Kenya’s illegal alcohol manufacturers will be here to stay. Sporadic raids are not long-term solution to the problem of illegal production and consumption of alcoholic drinks.

The national and county governments need to stand firm on withdrawing and or revoking licenses of all traders, who are engaged in the business producing, distributing or retailing illicit brews. A standard legislation needs to be taken up by the Council of Governors.

In this regard, we urge NACADA to urgently bring together stakeholders to address this growing challenge considering that more consumption of illicit and counterfeit drinks is anticipated as the general elections seasons sets in. After all, elections are often associated with alcohol-based hooliganism among the young people.

Consequently, we urge the government to launch investigations to identify officials involved in the business as protectors or factory owners, distributors as well as owners of illicit retail outlets. Such rogue government officials should be relieved of their duties immediately and be made to answer to the law.

Through NACADA, government needs to embark on a continuous consumer sensitization campaign to educate the consumers on the dangers of consuming unapproved/unlicensed products. By invoking provisions of Article 46(1)(b) of the Constitution which states that Consumers have the right to information necessary for them to gain full benefit from goods and services – manufacturers need to do more on consumer sensitization.

The Directorate of Criminal Investigations and the Office of the Inspector General of Police need to provide a clear strategy on how to put this matter to rest, especially now as the country heads into an electioneering period. OCPDs and OCSs need to be directed to be regularly avail information on arrests, seizures and volumes of such illicit drinks.

We urge the Kenya Bureau of Standards (KEBS) to recognize that there is an urgent need to make it difficult for unscrupulous people to counterfeit the KEBS marks. KEBS will need to do more by enhancing its’ market surveillance role.

It is also important that the media fraternity offers more publicity on the consumption levels and enforcement levels against illicit, contraband and counterfeit alcoholic beverages.

That County Governments and County Security coordinators should also work closely with licensed distributors and distillers to ensure only licensed products are sold in their respective counties.