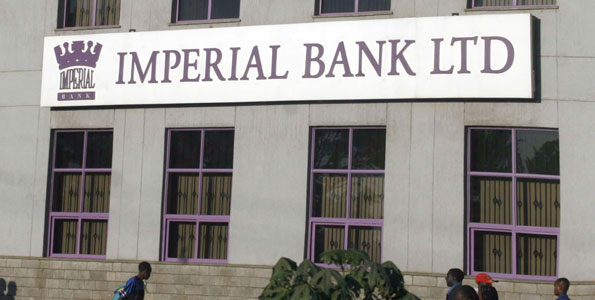 NATION: Spotlight on banks in the country heightened Tuesday after the Central Bank of Kenya (CBK) put another Kenyan bank, Imperial Bank, under statutory management, barely months after the collapse of Dubai Bank.

The regulator revealed Tuesday it had taken the drastic decision after learning that “unsafe and unsound business conditions to transact business” existed in the bank. Separately, sources said an internal fraud scheme had occasioned the move.

“The board of the directors of Imperial Bank brought to the attention of the CBK inappropriate banking practices that warranted the immediate remedial action in order to safeguard the interest of both depositors and creditors,” said CBK governor Dr Patrick Njoroge as he announced he had appointed the Kenya Deposit Insurance Corporation (KDIC) as the manager for the lender for twelve months.

The twin moves sent shockwaves in the banking sector in the region and elicited fresh questions on whether some financial institutions have been eluding the regulators’ eye.

“As a result of the interventionary action by the CBK, the Capital Markets Authority has directed the Nairobi Securities Exchange to suspend the introduction of the listing and trading of the Corporate Bond issued by Imperial Bank. This suspension has been imposed in the public interest and to protect the interest of investors,” CMA acting CEO Mr Paul Muthaura said in a statement.

“Accordingly no deposits on any types of accounts operated by Imperial Bank Limited (in receivership) shall be paid nor shall any claims by any other class of creditors be met,” said Mr Bett.

He announced Mr Peter Gatere had been appointed as receiver manager for the bank to carry out the business and manage the assets and liabilities of the Bank.

“Normal operations of the Bank are suspended except for collection of loan re-payments or any other payments into the bank. Debtors are therefore encouraged to continue servicing their obligations. For this reason, KDIC will in the meantime keep all the branches of the Bank open for such transactions,” said Mr Bett adding that due diligence would be taken to ascertain the veracity of “irregularities and malpractices in the bank” and to determine the most appropriate resolution mechanism in the shortest time possible.

Mr Abdulmalek Janmohamed who had been CEO since the bank was formed died last month.