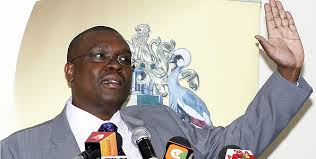 On Friday Kisia and Kidero took to their phones to exchange messages, seen by us, over the struggle of who initiated most of the projects Kidero claims to be his.

“Really??? If you find a man has made a woman pregnant u take credit …. It took me 36 months to out those things in order including getting Cabinet approval. If u sit for an exam n die before the results are announced, does the brother take credit …. Q is where is your blueprint Bw. Gavana…” added Kisia.

Then Kidero replied “You are credited by what you finish not what you start. Its the person who brings up a child that ‘s the father not the one who made the mother pregnant”

“We inherited a city in a hole. Nothing has been happening in Nairobi for the last 50 years. When I became governor in 2013, the county government inherited debts to the tune of Sh52 billion. Remember Nairobi is the capital of this country and the communication, transport and financial hub in the region. We require Sh100 billion to run this city effectively”, Kidero separately told “The Nairobian” newspaper