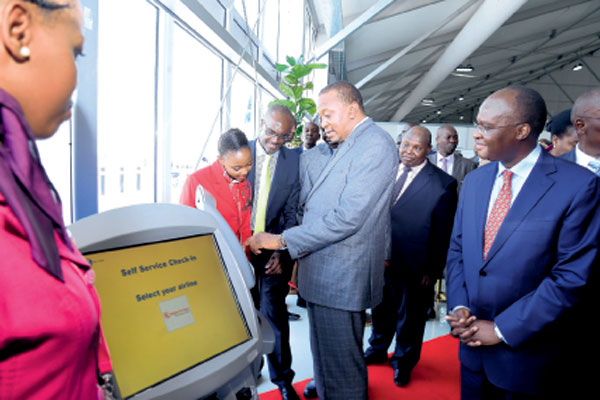 While opening the new terminal 2 at Jomo Kenyatta International Airport on Friday, the President asked the airports authority chairman, Mr David Kimaiyo, to identify the officials involved and ensure they are prosecuted.

During the tour, the President is said to have been informed of the five buses leased by the authority to transport passengers from aircraft when planes are parked away from the arrival or departure terminals.

The five buses are said to be leased at a cost of Sh2 million each a month.

“I find it impossible to believe and to understand that you can say you have five buses here that you are paying Sh10 or Sh11 million per month to operate. Why don’t you come and I give you NYS buses at Sh100,000. This theft must be stopped, we cannot sustain this,” Mr Kenyatta said. “Those who are responsible for this misuse of public funds must be arrested and the funds recovered with immediate effect.”

Officials at Kenya Airports Authority, who sought anonymity because they did not wish to be seen to be directly contradicting the President said the idea to bring in the buses was mooted in 2010, worked out and presented to the board, which gave the green light.

A leasing arrangement for the special vehicles was preferred to outright buying as the latter was deemed too expensive with the cost of one bus put at almost Sh50 million. This cost includes charges for running the bus, insurance and servicing it.

The sources say the project was advertised and the buses leased at Sh2 million a month, which was supposed to be borne by the airlines using the service, at a cost of $45 (about Sh4,400) per bus every trip.

“It was designed as a commercial venture and not as a free service. The airlines are supposed to be charged for every trip. That way, there is no cost to the authority. What I don’t know is whether Kenya Airports Authority has been charging airlines as is supposed to since the buses arrived in March. If they are offering it as a free service, then obviously it becomes a cost for the authority but that is not what the original idea was,” said the source.

The authority is not new to investigations over tender wars and financial impropriety.

Kenya Airports Authority board cleared the four late March before a State House directive released three days later asked the authority’s board to convene a special meeting and appoint a new managing director.

In 2012, procurement of the Greenfield terminal, now under construction, was also marred with accusation of impropriety pitting the then transport minister Amos Kimunya against the authority’s management then led by Mr Stephen Gichuki.

The terminal cost of Sh1.7 billion and will cater for international arrivals and departures.

The expansion and modernisation is expected to push the airport’s annual passenger capacity to 25 million in the next decade. It has been designated as a flagship project in Kenya’s growth blue print, Vision 2030.

Fly 540, Sax, Jubba and African Air Express are among airlines that have already been running from the new terminal.