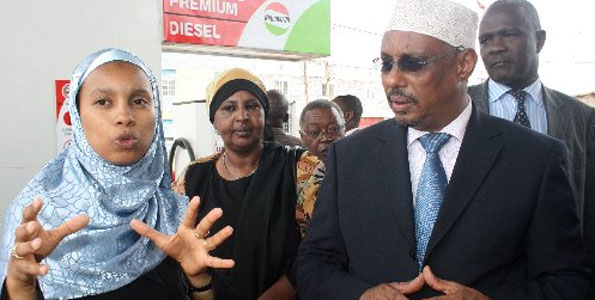 We have learnt that Energy and Petroleum Cabinet Secretary Mr Davis Chirchir has defied our formal caution to Head of Public Service and our request to the Auditor General for a corporate special audit to have unprocedurally extended the contract of National Oil Corporation (NOCK) CEO Ms Sumayya Hassan-Athmani (pictured left).

From all the NOCK board meeting minutes in our possession, there was no 6 months prior formal request by Ms Sumayya  to have her contract extended and neither was a formal appraisal made to rate her performance.

We are also aware of various NOCK directors who are on our record asking for board discussion of governance challenges which requests were ignored by board Chairman.

The purported board recommendation for Mr Chirchir to have based his renewal decision is fraudulent, vain, suspect and smacks of impunity, graft and which combine into abuse of public office.

NOCK Chairman Mr Peter Munge and Mr Chirchir must now disclose their personal interest on circumventing the letter and spirit of the law to purport to ignore the law. We will be asking the Ethics and Anti-Corrution Commission to separately investgate on certain information in our possession.

We pledge the strongest legal battle ever and have instructed our lawyers to commence legal proceedings, in a fortnight, should Mr Chirchir not rescind his futile appointment of NOCK CEO.

Finally, we plead with the President Kenyatta to review the performance of Mr Chirchir with a view of immediately relieving him of his duties as his continued presence in office remains a major embarrassment to Jubilee Government’s ambitious manifesto.